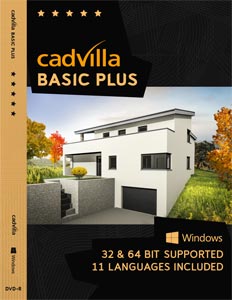 – All prices are incl. the statutory VAT.
– Full version with unlimited usage time
– Latest version of the architecture program
– Software can be used on a maximum of two end devices

The purchase process and delivery of the product is handled by our contractual partner cleverbridge AG based in Cologne, Germany.

General information on Cadvilla basic plus 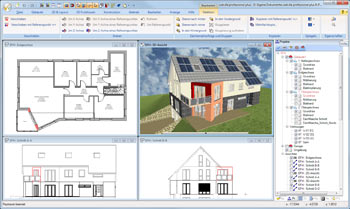 Cadvilla basic plus is the enhanced basic version of our architecture software for simpler projects. It has all the features of the basic version “cadvilla-basic” but also offers other important features. One of the most important highlights is the automatic creation of 2D side views and sections based on the captured 3D model. These are specifically required for building applications. However, this function is also extremely important for the further construction of elements that can only be defined in a side presentation (such as a polygonal wall recess).
In addition to the functions for drawing floor plans, it can also perfectly be used as 3D furnishing planner. Thanks to the considerably extended editing options compared to cadvilla basic, the floor plans can be modelled in even greater detail and furnished.

During the virtual inspection, you will receive a realistic first impression of the fully furnished rooms even before they actually exist using our 3D visualization  No matter whether you are a private builder or beginner: With Cadvilla basic plus, simpler projects can nicely be prepared, and you become your own architect.

Cadvilla basic plus includes all the CAD features of the “basic” versions.

Creation of side views and sections – an important feature 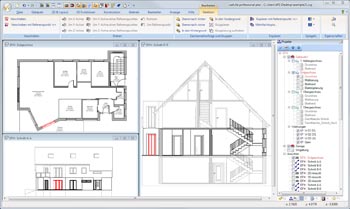 Private builders and beginners who want to implement smaller projects for building applications not only benefit from the intuitive operation of the program, but also from the high scope of performance of the Cadvilla basic plus version. Among other things, you can automatically create 2D side views and sections based on the 3D model and further edit them.

Thus, elements that require exact positioning in height (z-axis) can be positioned precisely and simultaneously aligned with other elements. Sections are also a necessary prerequisite for the graphic determination of height positions. For example, they know the maximum prescribed height for your dream house. On average, the exact eaves height for the finished defined roof can be graphically determined and thus exactly adapted to the maximum permissible overall height.

All 2D top views, side views and sections of the floor plan can be decoupled from the 3D model using the 2D graphic view and converted into a pure 2D vector graphic.

This makes the plan fully editable. The presentation of lines and polygons can be modified or deleted as desired and thus give the user full freedom in designing his final plans.

Cadvilla basic plus is the enhanced version of the basic architecture software and requires Windows 7 / 10 / 11. The cadvilla basic plus version is upward compatible to all versions of the same version number, i.e. with cadvilla professional and cadvilla professional plus. Work you have already started in a lower version can be transferred to the higher version after an upgrade. The multilingual feature of the software including over 10 languages is another great advantage.

Overview of the range of functions

A detailed overview of the functions of this version

More information about the 3D architecture software cadvilla basic plus

Some outstanding information about the 3D architecture software cadvilla basic plus

More details on the functions of cadvilla basic plus

The following languages are integrated in all cadvilla versions, and can be switched via the settings.

Upgrade from cadvilla basic plus to the latest version

The current version of cadvilla basic plus contains many new features compared to older versions. Here, you get a detailed overview of the new functions, enhancements and prices.

Learn more about the upgrade

Upgrade to a larger version of cadvilla

You need a larger scope of performance and would therefore like to upgrade from your existing cadvilla version to a higher version of cadvilla? Here, you get a detailed overview of options and prices.

Upgrade to a larger version
This site uses cookies. If you continue to use the website, we will assume your agreement.