Main characteristics for each version in comparison

In the following table you will find important features of cadvilla compared to ArCon [planTEK].

Legends of the following table:

– Feature is included in this version

– Feature is not included in this version

32 AND 64 BIT Software, Multilingial
Planning a house, home, furnishing and garden
Capture and output of the projects true to scale
Virtual tour through the project in 3D
Taking the course of the sun and the shade into account
Photo-realistic display in 3D
Extended functions for advanced users
Parallel display and planning in different views
Creating your own sophisticated 3D objects
Support of a layer technique for floor planning
Merging multiple individual roofs
Overall plan with all floors for the building application
User interface and menu navigation
User interface via tool bars
User interface via ribbons
Interfaces – import and export
-Import of 2D-DWG and 2D-DXF files
-Export of 2D views in 2D DXF format
Use of existing object collections
Use and import of existing ArCon projects
Saving projects in ArCon format *.acp
32 AND 64 BIT Software, Multilingial

ArCon is available only in English and German.

If you install ArCon under a Windows operating system with 64 BIT, it works but is running in a 32 BIT mode.

You can design and furnish your house or your home with cadvilla and ArCon planTEK.
There are several predefined terrain types as well as the option to input elevation points available when planning the outdoor area.

Furthermore, cadvilla and ArCon planTEK provide the possibility to automatically create sectional views and side views.

Projects designed with cadvilla and ArCon planTEK can have any number of floors, walls, windows, doors etc. We are talking about the professional versions of all three packages without any limitations.

Capture and output of the projects true to scale

All program versions we offer facilitate an input true to scale – supported by grids, auxiliary lines and other construction aids.

The input of the projects is performed true to scale as well. With the help of a (free of charge) PDF printer a PDF document can be created.

Virtual tour through the project in 3D

The virtual tour through and around the building gives you a first impression of your project.

In ArCon planTEK you can control the walking direction by using the mouse.

Taking the course of the sun and the shade into account

The position of the project/the house via longitude and latitude is defined with the help of a dialog box (the input can also be performed via definition of country and city).

There is a north arrow included in the construction plans through which the alignment of the altitude of the sun and the shade with reference to the building is calculated.

The project can be displayed in 3D in a photo-realistic way. When inserting a background image (e.g. a photo of the property), you see immediately how your house looks like on your property.

The ray tracing and the quality of the rendered images is extended in the cadvilla versions in comparison to ArCon planTEK. 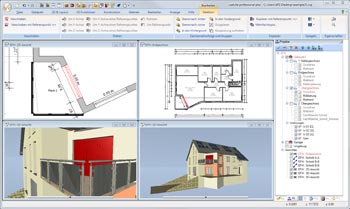 In cadvilla the progress of a project can be followed via different simultaneously displayed views (2D top views, sectional views, 3D views).

As an example, you can see two pillars and the corresponding landing selected (displayed in red) in the adjacent image. Due to a parallel display of all views you always have a full overview of and on the project. Every modification is carried over to all the other views at the same time.

Creating your own sophisticated 3D objects 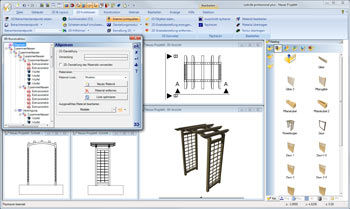 ArCon planTEK provides the option to generate SIMPLE objects with the help of the plate designer in combination with existing objects.

Cadvilla allows you to create SOPHISTICATED 3D objects via the 3D constructural designs.

This can for example be a carport, a vase but also an antique balcony.

Due to the combination of 3D solids – consisting of base solids, extrusion solids, rotational solids and solids that follow a contour (sweep objects) – new objects can be generated due to blending features (Boolean operations) in order to use them in your project.

The examples in the adjacent image were created with the 3D constructural designs by cadvilla.

Support of a layer technique for floor planning

The layer technique facilitates the application of layers with content of areas that belong together in order to be able to display and hide them separately.

The most important application areas of the layer technique in cadvilla are: 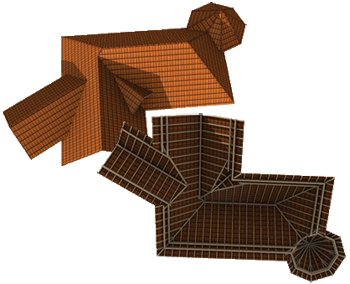 Today, the requirements regarding roofs become increasingly extensive due to the use of new technologies and higher requirements of house builders. For this purpose, cadvilla professional plus provides an efficient tool.

Firstly, the individual roofs are positioned and put in – for example a normal gable end roof, monopitch roof or hipped end roof.

Afterwards, the individual roofs are merged by a few mouse clicks. The recalculation of the complex timber construction as well as the entire roof shape is performed completely automatically.

Overall plan with all floors for the building application

In ArCon planTEK every floor can be put out on a single plan true to scale. Side views and sectional views can be displayed optionally on a sheet at the same time.

If a plan output with ALL floors, side views and sectional views is required on ONE plan, you will need a function for a plan layout.

ArCon planTEK does not provide such a function – however, it can be complemented by additional software packages.

ArCon planTEK as well as cadvilla provide the option to display the user interface via tool bars.

The upper area contains functions such as for example creating views, opening, saving and zooming.

In addition to the known display of the tool bars of ArCon cadvilla provide the option to display the user interface via ribbons.

Ribbons are modern tool bars and are used successfully in many known programs since the introduction of Office 2010.

2D DWG and 2D DXF files can be imported, displayed and stored as layers when capturing the floor plan. The lines and vertices on these layers then serve as some kind of catch points and catch lines so that you can construct walls, windows etc.

The dialog box that appears when importing contains two areas. In the first area you can select the desired “layer” – in the second area the layer is displayed visually in a preview.

With this function, 2D DXF files can be generated in other CAD systems (e.g. AUTOCAD) for further processing.

cadvilla also provides the possibility for a 2D DWG export. Furthermore, in cadvilla you can determine on your own which software version of AutoCAD should be considered for the export. This ranges from AutoCAD R09 up to AutoCAD 2018.

Use of existing object collections

Regarding ArCon planTEK:
You can continue to use object collections for ArCon (*.ACO, *.O2C) in ArCon planTEK without any problems. It is possible to import 3DS objects.

Use and import of existing ArCon projects

Regarding cadvilla professional plus:
This function facilitates the import of existing projects (*.acp) based on ArCon [planTEK], ArCon open or on older ArCon versions up to ArCon +6.30.
Ideally, you can take over the complete project with all walls, ceilings, windows, doors in 3D and can then edit, modify and amend it by using cadvilla.

It is not possible to save projects in ACP format with cadvilla because cadvilla is completely new developed software based on Microsoft.NET with a powerful 3D core. The data model of the project of cadvilla is a complete 3D model.

Menu
This site uses cookies. If you continue to use the website, we will assume your agreement.